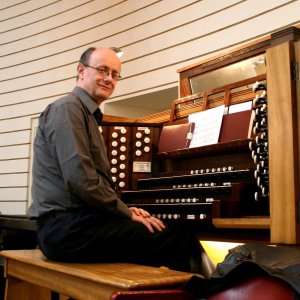 Duncan Middleton started the piano at 6 years old, and continued until the age of 12, when he started learning the organ with Norris Marshall for over 10 years, incorporating elementary improvising. He went on to learn liturgical improvisation at the age of 15 at the basilicas of Lourdes in the south of France. He was assistant organist at St. Edmunds Catholic Church in Whitton from when he was 16 for five years, and became organist at the Catholic Church of Our Lady Queen of Apostles for four years, then moved to Cambridge where he was deputy organist of the Roman Catholic church of Our Lady and English Martyrs for three years. Upon his return to London, he was appointed Organiste Titulaire at the French Catholic church of Notre Dame de France, off Leicester Square, where all Masses incorporate French style improvising during the entrance, offertory, communion and exit. Duncan celebrates 30 years there on 19th November 2019. He studied advanced improvisation with Loic Mallie, and is co-founder of the London Organ Improvisation Course (LOIC) with Gerard Brooks. Duncan has taught improvisation to numerous private pupils from Europe, the USA and Skandinavia, and continues to do so. Duncan has also been commissioned by the church of Notre Dame de France to compose two organ works (as yet unpublished) in celebration of the restoration and cleaning of the famed Dom Bedos tapestry in the church, and for the church’s recent 150th anniversary. 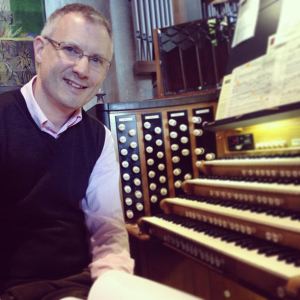 Andrew Cantrill-Fenwick is one of the UK’s most experienced and versatile church musicians. His career has taken him to three continents, working in schools, churches and cathedrals, and he has appeared in some of the world’s most prestigious venues as conductor and organist.  He is a Fellow, prize winner, and Regional Consultant of the Royal College of Organists, tutor for the RCO Academy, examiner for the Associated Board of the Royal Schools of Music, and sought-after recitalist, lecturer and writer.

He studied the organ with Lady Susi Jeans, James Lancelot and Peter Wright, and, for improvisation, Gerre Hancock and David Briggs. He has contributed over 30 educational videos to the RCO’s virtual campus iRCO as presenter, producer and script writer; and enjoys running workshops and masterclasses across the country. As an improviser, he enjoys accompanying silent films and improvising in recitals, and he won the Dixon Prize for improvisation at FRCO. 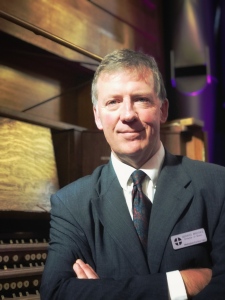 GERARD BROOKS first studied the organ with John Webster, and was elected Organ Scholar at Lincoln College, Oxford. After further studies with Susi Jeans, he was the first organist to win the Stephen Arlen Memorial Award; this together with further grants – from the Martin Musical Foundation amongst others – enabled him to study for two years with Daniel Roth at Strasbourg Conservatoire in France, where he was awarded the Première Médaille in organ.  On his return to the UK he spent a further postgraduate year in Cambridge, studying with Nicolas Kynaston.  In 1987 he was appointed Associate Director of Music at All Souls Langham Place. During his time at All Souls he played regularly for BBC Radio 4’s Daily Service, and toured with the All Souls Orchestra, playing in many concert halls, including the Royal Albert Hall, Moscow Conservatoire and here at the Royal Festival Hall. At the same time, he continued to develop his teaching and performing career as well as performing in many West End musicals as a keyboard player.

In 2008 he joined the staff of Methodist Central Hall, Westminster as Director of Music, where he plays the famous Hill concert organ. He is also Curator Organist of the outstanding historic reconstruction of Richard Bridge’s eighteenth century organ at Christ Church Spitalfields.

Gerard is particularly busy as an organ tutor at all levels, holding posts at Latymer Upper School, Sevenoaks School and the Royal Academy of Music; he is also a tutor for the Royal College of Organists Academy, and has taught for the London Organ Day, Oundle for Organists and the Edinburgh Organ Academy.  He was the first recipient of the Forsyth-Grant/Hurford Travelling cholarship awarded by the Royal College of Organists and from 2019-21 he serves as the college’s President.

He has contributed many articles on the subject to musical journals as well as writing the chapter on French and Belgian organ music for the Cambridge Companion to the Organ.  His many recordings on historic instruments in France have often been broadcast on national radio and include the complete works of Eugène Gigout and Camille Saint-Saëns. He is the presenter and a performer on the Fugue State Films DVDs “The Genius of Cavaillé-Coll” (which won the BBC Music Magazine Award for Best Documentary in 2014) and “Widor: Master of the Organ Symphony”.